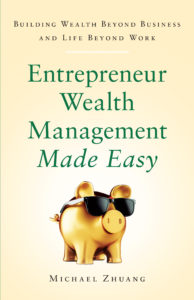 Looking for a better way to invest? Consider Betterment.

Michael Zhuang is founder and principal of MZ Capital Management, a wealth advisory with a wide range of clients. He holds dual master’s degrees in mathematics and quantitative finance from Carnegie Mellon University, and an EMBA from Oxford University. From 1999 to 2000, Michael was a financial engineer for Societe Generale, the largest French banking group.

In 2000, Michael was hired by PG&E National Energy Group to launch their weather derivatives trading business. Within two years, he became one of the top three traders in the field. In 2004, Michael started MZ Capital as a hedge fund management company, and in 2006, he changed the firm to a wealth management company specializing in helping physicians and entrepreneurs. He is also a bestselling author and acclaimed speaker. In 2017, he was named Top 100 Influential Advisor by Investopedia.

Michael is married with two children. His favorite hobby is improv comedy and storytelling. He was a Top Shelf storyteller in DC and won the Best Storyteller Award in Philadelphia’s Story Slam. He performs clean, family-friendly comedy regularly at corporate, charity and association events.